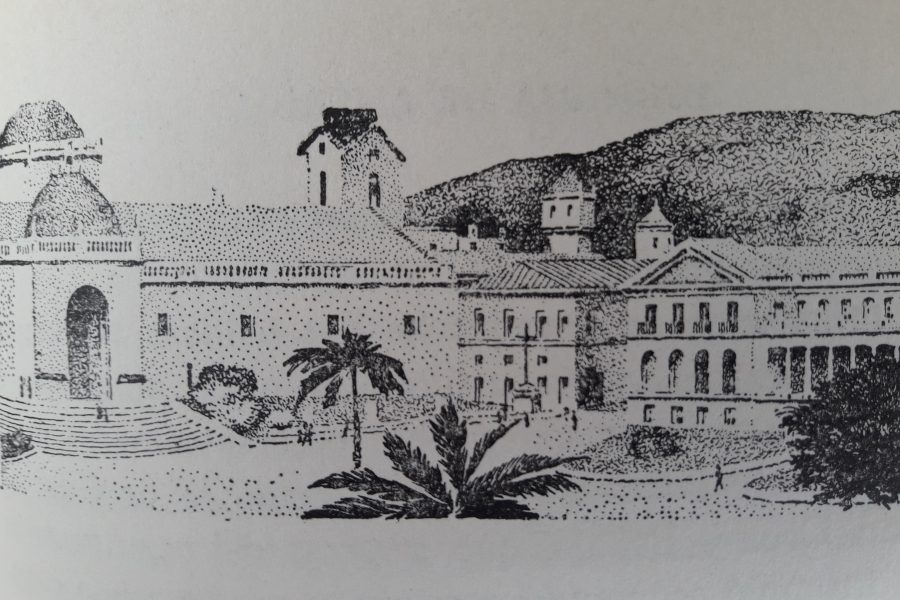 Oscar Efrén Reyes, my illustrious grandfather, died when I was three months old. He knew that little girl, the only offspring of his daughter Olga. On the other hand, “I didn’t know him”, so much so that I obviously don’t remember him. All I know about him is from my mother’s and uncles’ stories. Later, when I learn about his biography and works.
This short story does not pretend to be a biography, on the contrary, it is an anecdotal and even imaginative writing. Family and friends who are fond of biographies and historical and precise data will forgive me. I’m closer to poetry and legend…

I learned to love and admire Óscar Efrén, as that thin Ivorian boy who was born and grew up among the mountains and wild places of Baños de Agua Santa; undoubtedly, the purity of the air, the lushness of the trees, the noise of the waterfalls, the generosity of the land, contributed to enlarge the soul of that self-taught child. Gifted with an exceptional intelligence, will and discipline, from a very young age he must have been a child thirsty for knowledge. ….. Providence made the Belgian Priest Thomas Halflants, who was a missionary in Baños, become a Guide or Mentor for the child Oscar. I cannot specify now how it happened, but Oscar Efren began to read a lot, the great classics of Literature and Universal Thought.
His enormous intelligence and superior spirit gave birth to the researcher, the teacher, the writer and later the historian. My mother always told me how the young Óscar Efrén became a school teacher at thirteen years of age!
It would take too long to tell you about his life since then. I share with you a specific fact that I think about frequently, now that life has brought me to live in Guayaquil, the Port of Ecuador. I learned, also from my dear and remembered mother, that Don Óscar Efrén, in some year of the twenties (last century), came to Guayaquil, surely for a contract with the then prestigious newspaper “El Guante”. It must have been an interesting and profitable challenge for him, who brought with him his young and beautiful wife from the highlands, his first three children and three “servant” children who I suppose were a kind of “nannies” for his children.
I like to imagine that long and perhaps stormy train ride across the Andes, zigzagging the famous “Devil’s Nose”, as the steep mountain is known, where the railroad work is an engineering prodigy. And how hard it must have been for my grandmother from the Sierra, trying to get used to the hot climate, the humidity and the insects.
I was telling you that I like to think about this, since I live in a beautiful citadel, surrounded by comforts. In one of the several visits of my mother, she told me: “how different from the times when your grandfather came”; thirty-five minutes by plane, air conditioning, insecticides and repellents, among other things,… but undoubtedly, the discomforts and difficulties, are those that forge the soul and will. That is why my illustrious grandfather was and will be an outstanding and great man: because he knew how to be resilient and overcome difficulties. He was an example for his children, grandchildren, students and for the whole country. Today we need men like him: loyal, honest, upright, disciplined and hard-working.
Thank you for teaching us so much with your life and works, Grandfather Óscar Efrén!